Chlorine is a non-metal which is gas at room temperature. Chlorine is a yellowy-green gas which has a choking smell. 40 million tonnes of gas are made yearly by the process Electrolysis of brime. It is toxic. Therefore, it has been used as a chemical weapon in the First World War. Chlorine caused irritation in the airway, leading to pulmonary oedema (UK spelling) in humans. Pulmonary Oedema is an excessive build-up of fluid in the lungs which causes breathing difficulties... Yeah, not pleasant!

Chlorine is also the second-lightest halogen after Fluoride.

Chlorine is naturally combined. The compound Halite, otherwise called Sodium Chloride or Salt, is the main mineral which is mined for the element. But, Salt is soluble. The Sodium chloride has leeched into the oceans from land and salt beds, or ancient lakes, can be also mined for chlorine.

The Discovery of Chlorine

Chlorine was discovered in the year 1774 by the Swedish chemist named as Carl Wilhelm Scheele (Pictured left). Though hydrochloric acid (HCl) known to the alchemists already. But, it was the gaseous element form which was identified by Carl Wilhelm Scheele. It was isolated by heating hydrochorlic acid with the mineral - pyrolusite, which is a naturally occuring Manganese Dioxide (MnO₂). A dense, greenish-yellow gas was formed. Carl Wilhelm Scheele recorded Chlorine of having a choking smell and disolved within water to form an acid. The element bleeched litmus paper and discoloured leaves.
But, the chemist believed that he had created Oxygen. Not Chloride.

But, Carl Wilhelm Scheele wasn't the only chemist who tried to isolate Chlorine. Sir Humphry Davis also investigated it in the year 1807. It was eventually concluded that Chlorine wasn't just a simple substance - It was an element. Sir Humphry Davis announced this news in 1810. But, chlorine wasn't accepted as an element until 10 more years for some to accept the fact.

We get most of our chloride ion through salt - Sodium Chloride. The typical intake is 6g. But, we only need half of that. 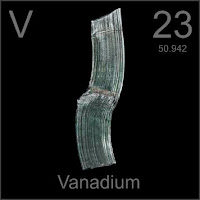 A curl of Vanadium Photo Credit: PeriodicTable.com Atomic Number: 23 Relative Atomic Mass: 50.9 Group: 5 Period: 4 Block: D Symbol: V Vanadium (seen as a curl in the picture: left) is a rare silver, hard but malleable metal which can resist corrosion. Vanadium is found in an estimated 65 different minerals! These minerals include; Carnotite, patronite and vanadinite (Pb₅(VO₄)₃Cl). It is also found in phosphate rock, types of iron ore and crude oil. The name, Vanadium, comes from the shorter word vanadis which is the Norse name for the Scandinavian goddess - Freyja. Vanadis is the goddess of many things; Love  Sex  Beauty Fertility War Death Gold - (Ironically, not the element mentioned)  Discovery of Vanadium Andres Manuel del Rio Photo Credit: Wikipedia Vanadium was actually discovered twice. The first (and official time) in the year 1801 by the Spanish-Mexican scientist, Andrés Manuel del Rio. Andrés Manuel was the professor of Mineralogy i 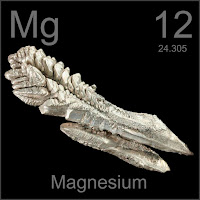 This is Magnesium crystal (Photo Credit: Periodic Table ) Atomic Number: 12 Relative Mass: 24.3 Group: 2 Period: 3 Block: S Symbol: Mg Magnesium is a silvery-white metal which can ignite easily with air and burns with a brilliant bright white light. It is the 8th most abundant element in the Earth and makes up 1.92% of Earth's crust (as Magnesium Oxide). It's the lightest metals for its structural application.   Magnesium's Discovery (Photo Credit: Edinburgh Uni ) Magnesium was discovered in the year 1755 by a Scottish chemist called Joseph Black (Shown in the picture on the left). This discovery wasn't the pure shiny metal element though - that discovery wouldn't happen for over 50 years. In fact, Joseph Black was the first chemist to recognise magnesium as an element. The chemist had separated something called magnesia , Magnesium Oxide (MgO), from lime ... And no, this isn't the green citrus fruit. No, this Lime is the common name 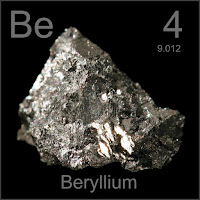 Beryllium (Photo Credit: PeriodicTable.com ) Group: 2 Period: 2 Block: S Atomic Number : 4 Relative Mass : 9 Beryllium was discovered in the year 1797 by the French chemist named Nicolas-Louis Vauquelin. This is a very rare element within the universe which normally comes about by a process of spallation (The breaking of a nucleus into several parts). According to some sources, the name for this element was changed from Glyceynum because of the sweet nature of the beryllium salts - with that name come from the Greek word Glykis meaning sweet. Though, I wouldn't suggest that you ingest beryllium as it has plenty of health concerns. It could cause anything from Lung inflammation to skin irritation and lesions. It's fair to say that beryllium is toxic but this element can also be carcinogenic (a substance which can cause cancer). If inhaled, the element cause the incurable inflammation lung problem - berylliosis. Please don't inhale/consume beryllium.